Parenting. Oy. If it’s not one thing, it’s another.

My two older kids ride the school bus to and from school.  I consciously choose this for MANY reasons:

1.) it is very convenient.  The bus picks them up in front of my house every morning and brings them right back to my front yard every afternoon.

2.) it is environmentally friendly. One bus services my entire neighborhood, as opposed to all the Über-Moms who send thousands of tons of toxic fumes into the atmosphere everyday while they idle in the car rider line.

3.) it is economical.  I don’t waste any money on gas driving to and from school or waiting in the car rider line.

4.) it is practical.  I don’t have to wake up my toddler early and load him into the car to take a 20 minute round trip ride to school and back.  Nor do I have to wake him prematurely from his afternoon nap to then jockey for a good spot in the car rider line half an hour before school is dismissed, and then listen to him scream in his car seat while we emit toxic fumes, burn gas we can’t afford to waste, and lose precious minutes that I could be spending folding clothes, scrubbing toilets, or blogging like the dirty cyber ho that I am.

5.) it is encouraged. The school system WANTS us to use the school buses.  They don’t want the car rider line hassles (which require police assistance for directing traffic!), or tardy students who disrupt class, or elevated carbon monoxide levels in the atmosphere.  And I like to please, as you know.  So, for the most part, I do what authorities tell me to do. (Note to husband: dress like an authority figure and boss me around tonight…I will obey and you will like it.)

So basically, it sounds like the right choice, doesn’t it?  I mean, it’s easy, green, cheap, smart, and preferred by 4 out of 5 dentists school officials to let your kids ride the bus.  Right? Right.

Then why do so many moms in my hood opt to drive their kids to and fro in their ginormous gas guzzling suburban tanks??

“Ask and ye shall receive.” I think I just found this one out, the hard way (my favorite learning style).

Last night my oldest son, Nature Boy, asked me, totally out of the blue, why the worst swear words “are just random strings of letters.”  I asked him what he meant, and he said “… you know, like F-U-C-K… it isn’t even a word, but it is the worst swear word.”  GULP.  I asked him where he heard that one and he said it was on the bus… the “big kids” (5th graders) say it. Fuck, is right. That’s what she said (in her head… she, being me, of course).  So, good news, my kid has no idea what “fuck” means (phew). Bad news, he’s hearing other kids say it on publicly funded modes of school transportation.

But that is not the only issue.  Recently he also asked me what “gay” means.  Dude.  Gay.  He just turned 9 years old! He’s only in the third grade! WTF?!  Apparently, the hot bully move du jour is to force a kid to look at your hands while you do some dorky random hand signal like this: 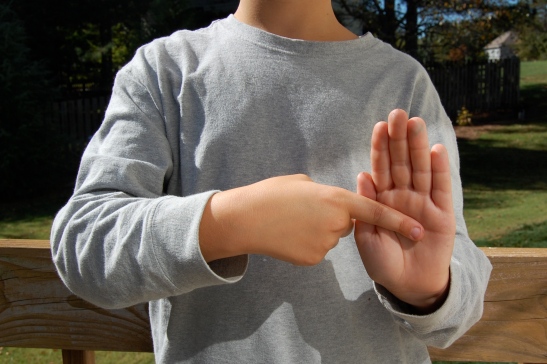 If you can get some cooperative younger child to stare at your hands for 5 seconds, then you say, “Now you’re going to go GAY!” (“go GAY!”… as if… like going bald or going crazy).

So my sweet little Nature Boy says to me, “Mom, these kids on the bus made fun of me and told me I was going to go gay because I looked at their hands for 5 seconds.”

I was stunned. Not only because I don’t think it is appropriate for a kid like Nature Boy who has yet to ask me a single question about sex to be learning about it from 10 year old rednecks…but also because I had no idea he was being exposed to this kind of hatred.

“And what did you say to that?” I asked him.

“I said, ‘So what? What’s wrong with that? Like on the Flintstones Song: ‘You’ll Have a Gay Old Time!’…it just means happy!’  I’m proud to be happy.  Those big kids are dumb.”

WOW. See what I mean, that this child was clearly switched at birth?  There is NO WAY I could raise a kid this cool.  So, I let him believe that gay means “happy” for about ten minutes, and then I decided that knowledge is power, especially when dealing with hateful bullying good ol’ boy idiot kids.

So I explained to Nature Boy that it is also called “gay” when two boys (or two girls) love each other and want to be together as a couple.  I told him that it is something that people either are or aren’t, but that you can’t “go gay” because someone forces you to stare at a random hand signal, or because you like to dance, or wear pink, or sing show tunes, (what? don’t look at me like that!) or whatever else the bullies say. I told him that there is nothing wrong with being gay, and that people who make fun of gay people (or people of different races, or genders, or religions) are just bullies who are afraid of things that are different. And that smart, educated, kind, loving people are not afraid of differences – we celebrate them and value them.

And this led to a very interesting discussion about right-wing conservatives their fear of homosexuals and gay marriage (except of course when soliciting gay sex in airport bathrooms…although we didn’t discuss THAT) and what a hypocritical thing it is for them to want to protect their freedom to bear arms, but deny others’ freedom to love whomever they choose.  And he got it.  He is such a great kid.

But then he asked, “Mom? If both of the people in the couple are men, who has the babies?”  GULP.  “And if they are both women, do they both have the babies?”  Oh boy. Here we go.  Deep breath.  And…

Phew.  He is only 9.  He still thinks girls are gross.  He doesn’t need to know about the more graphic fluid-based details. Yet. All in due time.

But in the meantime.  You know what?  I’m still going to let my kids ride the bus.  Because my kids are great kids and they are learning really important life skills on that smut bus, like dealing with bullies, increasing their vocabulary, and becoming citizens of the world! Thankfully, our home is one in which our kids are comfortable talking to us about issues like these, and we listen and try to help them make good choices about how to handle them.  Pretty good strategy, if I do say so my own damn self.

And as for you Über-Moms, sheltering your kids from school buses, bullies, and words like FUCK and GAY…. well, remember when you got to college and were out of your parents’ home for the first time and you drank every night until you either barfed or blacked out? And remember how you shagged every dude in your dorm because it was like a free-unsupervised-all-you-can-eat-buffet? Well, that’s not going to be my kids. Good luck with that.

In summary, and in accordance with my “Just the Tip Tuesday” promise, talk to your kids. Loosen the reigns, let them live a little, and create an environment where they want to talk to you.  You’ll all be better for it.  And while you’re at it, do what Jesus would do and teach them to love others. Your cooperation in this matter will make other kids’ bus rides so much more pleasant, and the world in general a better place for all. Thanks, sugar. 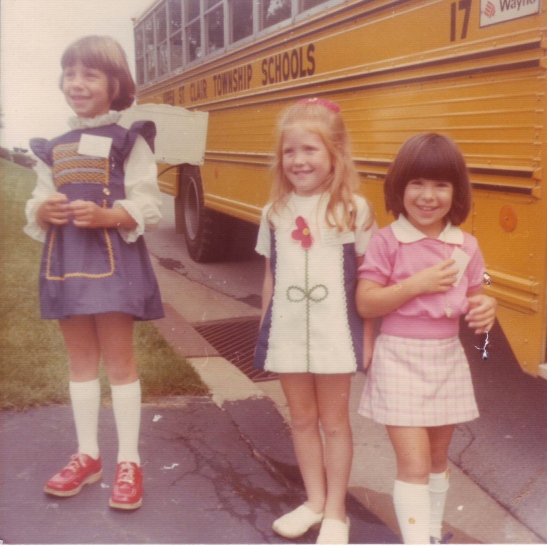 Iris and two classmates on the first day of Kindergarten, 1975.
Bus Riders, yeah-boyeeee.

(I’m not going to tell you which one I am…you’ll just have to guess.
But how ’bout the shoes on that tall drink of water on the left?
Did she think she was on her way to Clown College, or what?)

This entry was posted on October 21, 2008 by Leslie Marinelli in mother, practical and tagged bullies, bully, how to explain homosexuality to kids, humor, just the tip, love, love others, parenting, parenting tips, school bus, sex-ed for kids.