One down, fifty-one to go.

A few weeks ago I stumbled upon a great website and blog called I’m an Organizing Junkie: Living a Life of Simplicity and Order. I’ve been hooked ever since.

…create a list of 52 organizing projects or habits that need to be done or developed around your home…dressers, drawers, closet, toys, paper, you name it. Let’s do it! Having a plan is a great first step!  Tackle one a week or more and then come on back here on Fridays and we’ll talk about it. The highs and the lows. No stringent timelines, no project too small, just good fun, sharing inspiration and motivating one another.

My family and friends know that organizing is something that I am truly passionate about… probably because I so clearly suck at it. I bet if you added up the cost of all the “How to Get Organized” books in my home, then added in all the containers and baskets and shelves I’ve bought, then factor in all the money and checks and gift cards and coupons I’ve just flat out lost due to my lack of organization, you’d have enough money to hire a professional organizer to move in with me for a month and straighten my cluttered culo out once and for all.

But since that’s not going to happen, I like the 52 Weeks idea. It’s manageable. It’s low pressure. I’m going for it! Maybe 2011 is the year I finally get organized.

And I’m so pleased to announce that I have just finished one of the items on it! Whoo-hooo! Yes friends, the Lego Project is now complete. As you may recall, this is what it looked like when I started:

It took about a week of sorting, which, as I mentioned before, was oddly therapeutic and relaxing. Once I had them all sorted by color, I went to Ikea with my friend Mama Cloud and we picked out a fabulous shelving unit called Trofast. I even assembled it myself with very few violent outbursts. (Damn Swedish pictograms!) And here it is, in all its color coded glory: 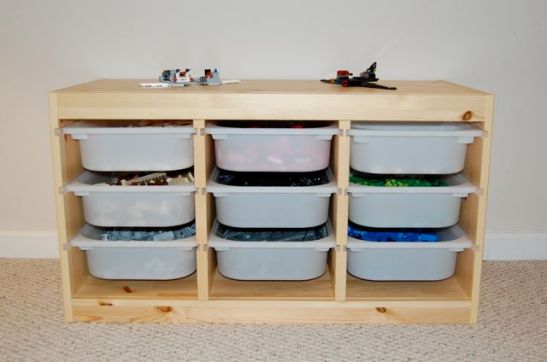 Isn’t that so much better? This unit comes in either pine or white laminated particle board. I chose the pricier pine because I like how it looks and I thought it would be more durable, but only time will tell. I accidentally over-tightened one of the bolts as I was building it and it slightly split the wood. I don’t feel like taking it back though, so I just turned the unit around and now the little crack is hidden. No big whoop.

Sadly, my little “Look how organized we are!” celebration didn’t last very long. The kids were magnetically drawn to the new storage system like moths to a flame. They couldn’t wait to start playing with their Legos and all three of them kept telling me how the new system made their play so exponentially more enjoyable. Feeling pleased and proud of my accomplishment, I went upstairs to see what Oprah was up to today and when I returned to check on them a little while later, I found this:

That is not what I was envisioning AT ALL.

They totally pulled half of the drawers out, the Legos they used were all over the place, and they did not clean up after themselves even a little bit. Shocking really, how quickly my basement went from Swedish paradise to Lord of the Flies. In less than an hour, the Legos were forsaken and Mini-Me was drawing with chalk on one of her stuffed animals, Spider-Man was sticking magnets up his nose, and Nature Boy was was on the computer playing with Photoshop: 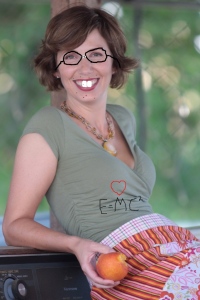 Nice. I am quite proud of his computer skills, actually. But I’m suddenly wishing I had spent that Ikea money at the Coach store instead. Damn ingrates.

Well then. I have 51 more organizing projects to do, and I’ll be damned if the next few aren’t going to be for me me me instead of those ferrets, I mean, children. Also, I’m starting to suspect that maybe being organized isn’t just about the purging and the sorting and the fabulous Swedish containerizing. Perhaps there are rules and expectations and routines that need to be established as well. Hmmm. It’s a mystery. Hopefully my wonderful new organizing guru at orgjunkie.com will enlighten me about all this in the weeks to come. And if not, maybe I’ll return that shelf and go purse shopping instead. I’m keeping my Ikea receipt just in case… somewhere around here.