So I go to take Spider-Man to preschool this morning and as I’m getting into the car, I notice that something is wrong.

Hmmmm. I don’t remember leaving all these plastic baggies in the front seat, I thought to myself. Upon closer inspection, I realized “the baggies” were actually just one baggie that had been shredded into numerous pieces. Near the plastic baggie shreds were also several fruit snack wrappers and granola bar wrappers, also torn to bits. 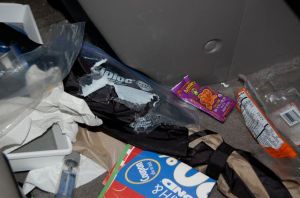 But the big give away was the torn tissues and napkins. I knew as soon as I saw the white fluffy confetti on the floor of the passenger seat that Ike had made his way into the car sometime in the last 12 hours.

What the…? How in the world did he get in there?

Then I remembered getting home from my in-laws’ Super Bowl party and carrying one of the sleeping kids into the house, leaving the van door wide open… which to Ike, is simply an invitation to an all-you-can-eat-buffet, doggie style.

I’m a mom. I drive a mini-van. I transport three children to and from a variety of activities every day. Thus, my van always has a cornucopia of crumbs and snack-stashes and dirty napkins strewn throughout it. For a dog like Ike, it is The Promised Land.

Usually, I don’t mind if he takes a quick tour of the van and sucks up the stray crumbs. But the shredding of the baggie, the wrappers, and the tissues means that he had way too much unsupervised time on his hands last night. My bad. Come on, the Steelers were on!

Scrounging for crumbs in the van isn’t his typical hunting style though. He’s usually much more brazen than that. He’s more of a kitchen-counter dine and dash kind of guy. And he’s not very good at covering his tracks. Like the butter wrapper I found on the kitchen floor this morning after my shower.

Or the toothpaste tubes I used to find under my bed before I got wise and started keeping them out of his reach. 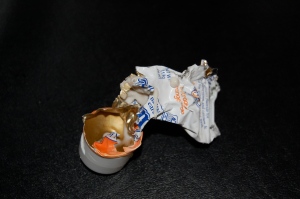 The kids are pretty good about not leaving food around. We watch out for each other if someone needs to leave the table, and it’s not uncommon to hear Spider-Man say to his siblings “Protect my food. I’ll be right back,” because inevitably, Spidey always has to get up and go to the bathroom the minute he starts to eat. Spidey is Ike’s favorite source for unattended food.

But Ike’s appetites aren’t limited to food, tissues, and toothpaste. He enjoys a variety of toys and art supplies as well. Usually we can hear him unabashedly chomping away on something suspicious and can save the toy before he swallows it. Some toys, like this vintage Fisher-Price Little People girl, put up a really good fight and are hard to swallow.

But other toys, like the stretchy green skeleton that Spider-Man carried around for weeks after Halloween, go down silently and quickly, only to be horrifyingly encased like Han Solo in the black Carbonite. Lucky for you, dear reader, I just so happened to notice this little gem while we were playing in the yard not too long ago. Poor green stretchy skeleton. We will miss you.

My husband, The Gatekeeper, would like you to know that he does not endorse my apparent affinity for scat photography or dressing the pets in Hannah Andersson pajamas.