Day One of Lent… FAIL.

A haiku about my first day of Lent:

I recognize that many people blow their Lenten promises at some point or another. Otherwise there wouldn’t be iPhone Apps like Lent Tracker and iConfess. But really, for me to fail by 10 in the morning, on day one, in front of my bible study group and our Director of Adult Faith Formation? Really? That’s impressive, even for me.

It’s not Geri’s fault. Poor thing is diabetic and over the age of 59… she doesn’t have to fast. She has an exemption. Geri was just trying to share her nutritious snack… she didn’t mean to play the role of evil temptress. But for me, having that trail mix on the table during bible study class was like seating Charlie Sheen in between two hookers at a titty bar: expect some grabbing, okay?

It wasn’t like I intentionally broke my fast out of weakness… I just plumb forgot. Damn fetal alcohol syndrome.

You’d have thought I would have noticed that Geri and I were the only ones eating the trail mix. But no. I didn’t.

You’d have thought that seeing all those black ashy crosses smeared on the foreheads of my teacher and peers would have been a constant reminder that “now is the appropriate time” for fasting and weeping and mourning. But nope. Nada.

That sure was some tasty trail mix! I nibbled on it throughout the entire class.

Not until later that day when The Gatekeeper was telling me what a great job he had done with his fasting did I make the connection and do the “I shoulda had a V8!” head thump. “OMG. I forgot to fast.”

And just like any diet, once I realized I had blown it, all bets were off. The rest of my Lenten promises went right out the window. I was eating Betty Crocker frosting out of the can with a spoon by the time the kids were in bed. Dammit.

Of course, making disparaging comments about the homoerotic and violent artwork in my children’s Catholic Picture Bible probably ain’t earning me any bonus points with God either. Sure hope He’s as merciful of a God as the Good Book says.

Luckily, I talked to one of my best bible buddies today and confessed my sins and she told me she didn’t even notice me going to town on the trail mix. Then she reminded me that the whole point of fasting is to be in solidarity with those who are hungry. “So what if you blew it on day one, just do it on day two, or three, or whenever!” No wonder I like that girl.

Alrighty then. Let’s try this again, shall we? Day two of Lent… 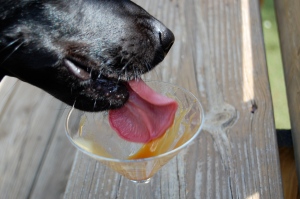 Bartender, another round please.

Sincerely and with apologies to my forbearing bible study sisters,